How to Get out of Your Own Head 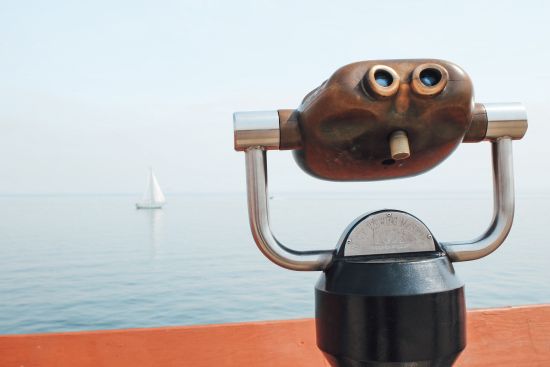 I often go with my friend and her chihuahua Abby to Abby’s favorite place in the world, which is a large open prairie field at Beaudry Park. It’s the only place she can run around all she wants without encountering her least favorite things: other dogs, and human children.

Sometimes there’s a line of cylindrical haybales at the edge of the big field. One time, my friend stuffed a chicken treat into one of the haybales, low to the ground so Abby would find it. After retrieving it, Abby went straight to the same spot on the next haybale, looking for the chicken that all haybales apparently contain.

We laughed, but humans are the same. Every time I go near the Assiniboine Park neighborhood, I’m helpless not to think of a nearby ice cream parlor called Sargent Sundae. In fact, I can’t even think about that area of the city without entertaining the possibility of working an ice cream sortie into my day. I suppose that’s natural; remembering food locations is undoubtedly one of the main reasons our minds developed the tendency to make such quick associations.

The human mind is a high-horsepower free-association_ machine_. Walk down a street you lived on as a child and notice the memories flood in, in astonishing detail — not just what grade you were in, who your friends were, and what you did on Saturday mornings, but the threadbare armrest on the basement easy chair, the sun-discolored cassettes that lived on your sister’s windowsill, and your pink-and-turquoise bouncy ball – the one with teeth marks in it — that ended up in the eavestrough.

Your memory banks contain millions of such details, and they shoot to the surface at the slightest provocation, each with their own emotional signature. The crunch of gravel driveway summons an image of the old grey Buick and its pungent air freshener. By just glancing at the old aluminum screen door, you can almost hear how it groaned when you opened it too wide.

With a hair-trigger, the mind connects what’s happening in the present to anything in its vast archives that might be relevant. It’s doing this virtually all the time, which is what allows us to remember where we live, what a ripe avocado feels like, and other important predictive information.

This free-association process seems to be pretty haphazard, however. For example, when I hear the song _Kokomo _I always think of the show Full House, because I saw the 1988 episode in which the Beach Boys made a brief guest appearance. This particular mental association isn’t very useful, but others are — I do think to duck when I go down certain flights of stairs so that I only hit my head once instead of every time.

Thankfully, I don’t find it all that distressing to remember _Full House, so it isn’t a big problem that my mind makes me think about it. Sometimes, though, the mind’s suggestions aren’t just useless, but upsetting. They trigger emotions such as fear or resentment, feeding the momentum of reactive thinking, triggering more thoughts and more emotions, and eventually landing on something you can’t stop thinking about even though you want to. We call this rumination_, a word originally used to refer to cows chewing regurgitated grass over and over.

When the Mind Gets Stuck

The thinking mind has no master plan, just ideas. You’re buttoning up your shirt in the mirror, and the mind says, “Hey remember that time you ran that entire meeting without knowing you had buttoned up your shirt with all the wrong buttonholes?”

The mind supposes this might be relevant information, given that you are buttoning a shirt right now, but it only triggers tangential worries that are harder to let go of. A moment later you’re thinking of a colleague who was that meeting and doesn’t like you, and probably would love it if you got fired. Now you’re thinking about all the various unpredictable ways you might get fired – are you sure you checked over the mockup you submitted Friday? Remember the time you went camping with that file still in your trunk, and your boss was calling you but you were out of cell phone range? Did you make a mistake like that last week? Are you sure?

Perhaps you don’t get hung up on shirt-buttoning tangents today, but you did check Instagram on the bus, encountered your uncle’s caustic political opinions, and now you can’t stop arguing with him in your head. Or you read something awful in the paper, or you thought you saw a mouse in the basement this morning, or maybe Peter hates the paint you chose but would never say so — there are a million ways into the tar-pits of rumination, and no reliable ways out. The advice from well-meaning friends to “stop thinking about it” is as absurd as being told that the cure for insomnia is to get some sleep.

The truth is we have little direct control over whether we have ruminative thoughts or not. The mind makes its associations without our consent, and gathers momentum easily. We can’t turn that feature off, and probably wouldn’t want to.

What we can do is make our thoughts less sticky, less magnetic, by learning to see them for what they are.

Practice treating thoughts like a TV in the other room

Thoughts depict real things — people, events, situations – and real things matter to us. But thoughts aren’t the things they depict. They’re hallucinations of those things. They’re sensations that happen only here and now, just like itches, sounds, and smells, but instead of itching or smelling they give an impression of something happening somewhere or sometime else.

To the degree you’re able to see thoughts as the hallucinations they are, you won’t be perturbed by them. As soon as you can see a thought as a thought even a little bit, the grip of rumination loosens.

It helps immensely to recognize that there are really only two kinds of thought: mental image and mental talk. Examine your thoughts and you will find pictures or visual impressions you can see, and language or sound impressions you can hear, and not much else. Thought is only ever made of those two ingredients, regardless of the subject matter, and those ingredients are never themselves upsetting.

This is almost perfectly analogous to a TV show or movie. No matter what horrors unfold on the screen, all that’s ever present are moving arrangements of pixelated light, and sounds coming out of a speaker. There are no monsters in the room. I’ve written before about taking advantage of this fact as a little kid, while watching scary movies other people picked – I would slightly cross my eyes during the bad parts, to blur the content of the movie back into raw light and sound, dispelling the hallucination.

We can do this with thinking too. We can loosen the emotional grip of our thoughts by learning to see them as raw mental image and mental talk, tuning out of the content in the process.

It’s not difficult but it takes some practice. Whenever you notice you’re starting to dwell pointlessly on something – the new coffee-break policy at work, the state of the Yankee’s bullpen – or really any time you notice you’re thinking a lot, try tuning into the stream of mental chatter as though it’s coming out of a TV in the next room. Notice that the mind is saying stuff, and let that stuff become the same undifferentiated blah-blah that any TV or radio show sounds like you’re a room or two away.

Do this practice now and then throughout the day, for ten or twenty seconds at a time. It might seem like a weird thing to try at first, to “hear” your thoughts rather than listen to them. There is a distinct difference which you can develop a sense for.

It may surprise you that the words keep coming even if you’re not entertaining them, just as a TV program keeps showing itself to an empty room. You can always hear it carrying on, but it’s up to you whether to go in and sit on the couch.

_ Finally! Raptitude is now on Patreon. It’s an easy way to help keep Raptitude ad-free. In exchange you get access to extra posts and other goodies. Join a growing community of patrons. [See what it’s all about]_

If you liked this post, get Raptitude sent to you. (It’s free.)