Personal Application Omnipresence, PAO. It’s a theoretical computing model where your applications are available to you from any device.

Personal Application Omnipresence, PAO. It’s a theoretical computing model where your applications are available to you from any device.

In 2009, I put into words my thoughts about personal computing in an always-connected, multiple-device world. I had been thinking about this model for years prior, but 2009 saw a fairly rapid uptick in speaking about “the cloud” as computing’s next big thing. This frustrated me because what we know today as the cloud is a distraction from what I believe is a better ideal, one that serves users and not large Internet companies.

My ideal for computing consists of applications that run on a central application server that I own. I want each application to be a single running instance to which I can connect and then interact with, from anywhere, from any device. Using modern parlance, the application’s user interface would be responsive to the context of the device and render according to the device’s capabilities, configuration, and constraints.

For each application there would be a single, persistent state. Together, all of my applications—my entire desktop—runs on hardware I own.

There is a well-established design pattern in software development called Model, View, Controller, in which three common tiers of components within applications are designated:

The problem with state synchronization

Still, consider a data import for a spreadsheet tool. Or an image import from a camera. In both cases, the initial message to all clients would be: “here is a big chunk of data to start with.” You’re still synchronizing documents in a fashion; you’re just going to be wrapping documents or pointers to documents inside of messages.

Synchronization is inevitably painful when there is any concurrency. Usually the last change wins, but sometimes you get into more complex algorithms to decide how to reconcile concurrent changes to state.

State synchronization should (although doesn’t necessarily have to) contend with message compaction or full-state imaging. If a device is offline for several weeks and then re-appears, does it receive every state change message one by one? Or does a service compact and image the state periodically? An analogue is full versus incremental backups.

Synchronization also faces greater challenge from device heterogeneity. With PAO and existing plain cloud services such as those using responsive web design, we concede that the display and user input capabilities will differ by device. But with any form of synchronization, device storage capacity and processing capability play an additional and potentially even more serious role.

It’s still not possible to fully synchronize a very large catalog of music between a desktop PC and a mobile device. Mobile devices do not yet have the capacity for our data.

Similarly, it’s not plausible to transcode ultra high definition video to multiple output formats (or do any other compute-intensive operations) on a mobile device. Mobile devices are not work-horses; they can’t do a whole lot of stuff for you while idle. They must go to sleep in order to conserve battery charge.

Because of this processing limitation and the obsession with “mobile first” development, a great deal of computing done on your behalf without your direct interaction is done by cloud service vendors on their servers.That is friction, plain and simple, and friction inevitably leads to some level of user frustration.It’s preferable for work to be done on your behalf with your data by applications you select and run on your hardware. We don’t presently do that because it’s “too hard.” And one reason it’s too hard is that no one wants to manually manage synchronization of data between their devices.

As for the additional complexity of application development, I caution that requiring message passing and synchronization to keep multiple application instances in lock-step is fragile and error-prone. Putting aside the all-too-obvious need to provide users with a fail-safe Resynchronize button and other error-correction techniques, the approach puts too much burden on developers. It would be too easy for developers to forget to synchronize key state transitions.

Below is the state transition diagram that Kellabyte provided in her blog entry.

The diagram has been kept simple for illustrative purposes, so I don’t mean to nitpick. But consider: where is the message back to Seesmic that the tweet was posted so that Seesmic can clear its tweet composition user interface and fetch the new tweet in the “My tweets” panel?

Certainly the Twitter for iPhone application didn’t mean to leave Seesmic hanging. But it might have done so out of developer error. (Again, it’s likely the diagram above has elided the follow-up message for simplicity, but I assume you get the point.)

Every state change would need to be messaged to all peer clients. This problem is expressly avoided in PAO by the simple matter that there are no peer clients. If Seesmic were running on an application server and you were interacting with Seesmic views on your PC and iPhone simultaneously, the state is implicitly consistent because there is only one state.

Kellabyte acknowledges that in order for the example provided to work, Seesmic and Twitter for iPhone need to use the same state synchronization messaging protocol. Presumably that protocol is ultimately Twitter’s responsibility (Twitter being the Cloud Service in the diagram).

This is already problematic because it assumes the capabilities of every Twitter client are the same. If Seesmic on PC A (your home computer) wants to notify Seesmic on PC B (your workstation at the office) about something Seesmic-specific, it’s out of luck. There is no proprietary Seesmic message protocol provided by the Twitter Cloud Service; it only knows about messages that would be common among all Twitter clients. This type of situation usually leads to craziness like vendor-specific extended message headers and the like.

Worse, if there is no clear service authority, such as within the context of e-mail, things are even more complicated. How is Thunderbird going to communicate its state information with the e-mail client on my Android phone? Mozilla and Google will have to play well together. In fact, Mozilla, Google, Microsoft, Yahoo, and dozens of other e-mail providers need to play well together.

They can barely agree on IMAP.

Importantly, in PAO, my e-mail application is Thunderbird. Full stop.

Imagine I have these three devices:

In today’s plain cloud, my three devices each have a Twitter client application. On Windows, I use MetroTwit. But you can imagine that I might use Seesmic or any other client. It’s not important which application it is except that presumably I have a favorite application.

On my phone, I use the stock Windows Phone Twitter client, although it’s safe to assume I would prefer to use my favorite (MetroTwit) in a form factor suitable for my phone.

Each device is isolated from the others and each communicates with the Twitter Service API independently. The orange arrows indicate communication through the Interwebtron. 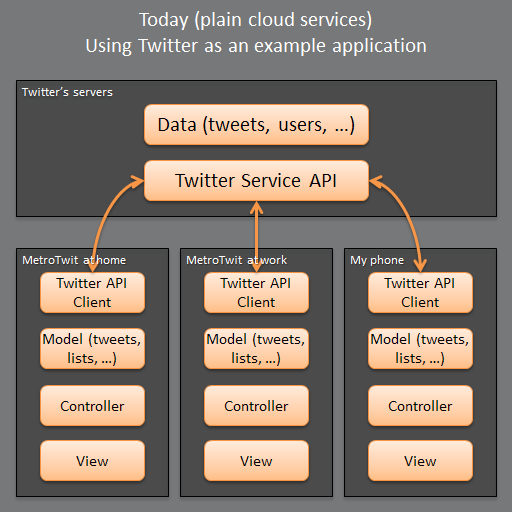 Each application has its own Twitter API client, its own model, its own controller, and its own view. Certainly I can’t seamlessly transition mid-tweet from one client to another. Similarly, the position I’ve scrolled to within my Twitter timeline is not consistent among the three clients, despite how much I would like it to be. There is no user continuity whatsoever.

This is the plain cloud, after all. Continuity is sparse and any continuity is proprietary.

While the Twitter API does store my favorited tweets on its servers, it presumably does not provide a mechanism to store my timeline position. That’s simply not a service that Twitter Corporation has decided to provide, and I don’t really blame them. As far as they are concerned, we should all use their mediocre web UI (but that’s a whole separate rant).

You can further assume that I have to install and configure each application instance independently. When MetroTwit has a version update, I need to download and install the version update on both my home and work PC. The same is true for my phone’s Twitter client.

In full state synchronization, a messaging channel is established between each application’s controller, allowing the communication of state information. 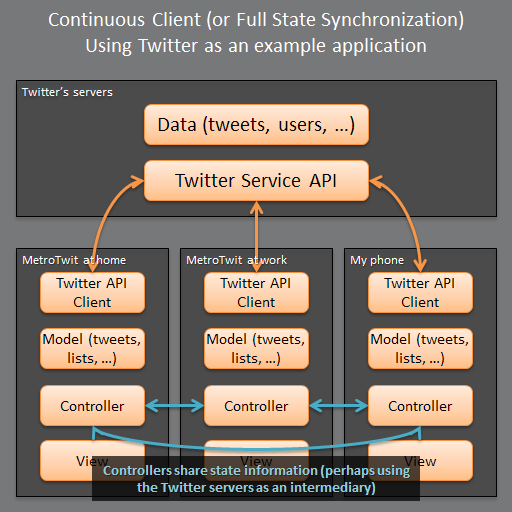 The state synchronization messaging channel (blue arrows) is possibly provided by the Twitter servers, presuming they are amenable to the clients sending one another these messages. But it could be an external platform, perhaps even a third-party service dedicated to providing state synchronization.

This is an improvement over the plain cloud.

State information is synchronized, so assuming the state sharing protocol includes mid-tweet messages (literally sending messages to the channel as I type each letter of my tweet), I can start a tweet on my home PC and resume the very same tweet on my phone. Similarly, assuming there is a timeline synchronization message, if I read up to 2:00pm on November 19, 2012 on my phone, my timeline will be scrolled right to that point on my PC at work.

Not bad! But this highlights some challenges:

In PAO, I only have one Twitter client application. I choose and install MetroTwit on my application server. I then connect to its views over the Internet. MetroTwit provides a desktop-friendly view and a mobile-friendly view in much the same way a “responsive” web site does today. 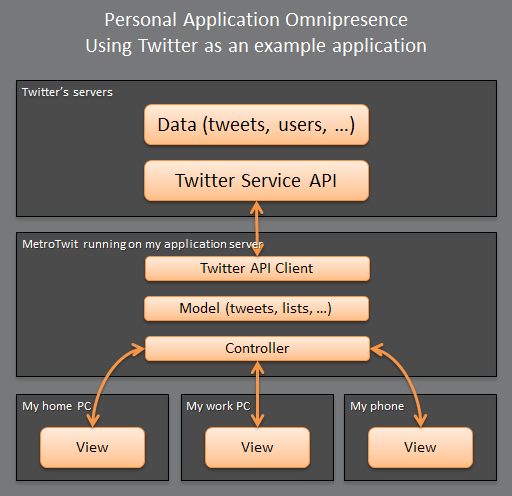 This illustrates some of the challenges that PAO faces. To enumerate some: